Capati, one of the panelists in the “Fighting Back: Best Practices” session of the “Democracy and Disinformation” conference, encouraged citizens to speak up online and in real life to their family and friends.

“I remained silent for a while. Maybe that contributed to the violence,” Capati said. 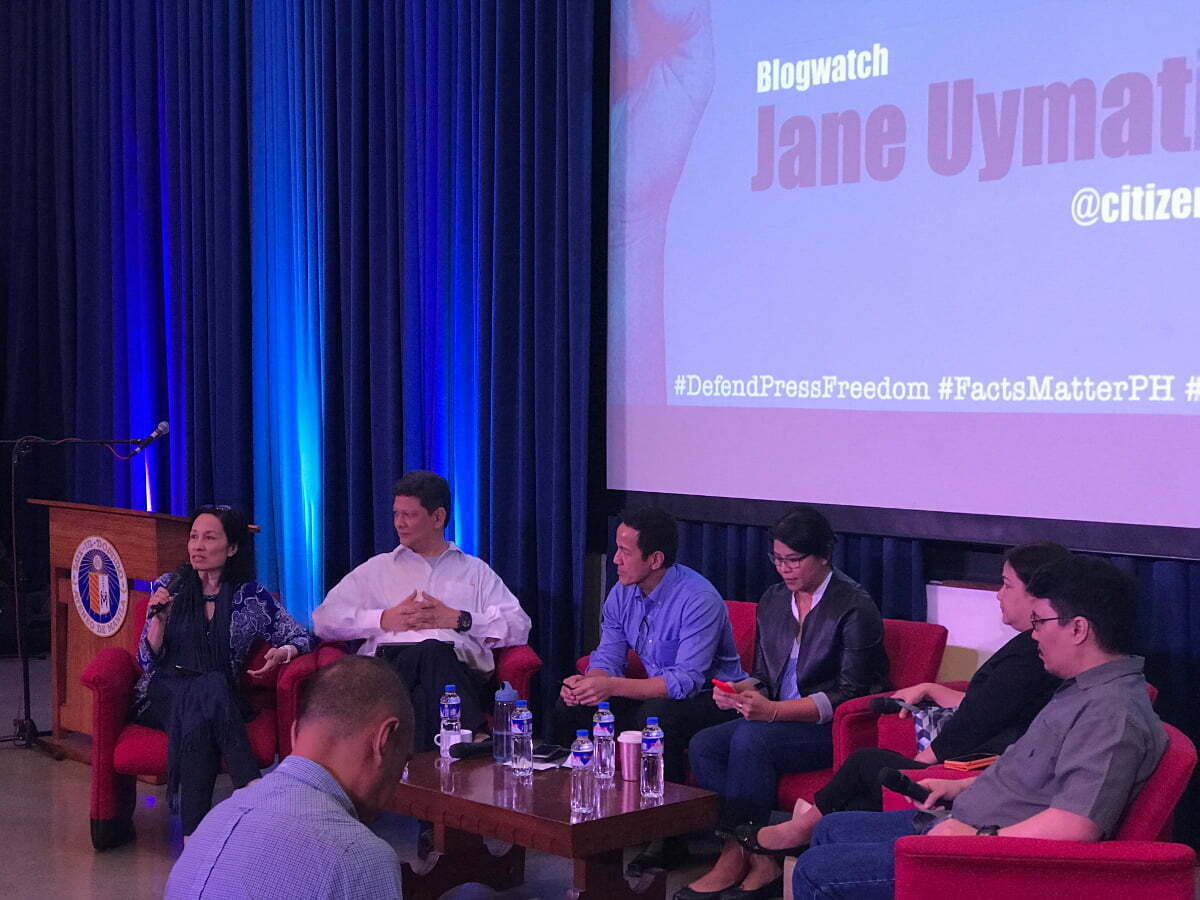 Jane Uymatiao of Blogwatch speaks at the Democracy and Disinformation conference on February 13, 2018. Also in photo are Ed Lingao of TV5, Vince Lazatin of Transparency and Accountability Network, Gang Badoy Capati of RockEd Philippines, Beng Cabangon of the Philippine Educational Theater Association, and Carlos Nazareno of democracy.net.PH

Laurio advised her audience to privately correct family and friends who post fake news. In doing so, however, they should be polite, compassionate, and never derogatory, she said.

“Puwede tayong makipaglaban na hindi kailangang makipagbalahuraan sa kanila because the truth is on our side,” Laurio said.

The conference, which discussed “fake news” and how to fight it, was held at the Ateneo de Manila University (ADMU) in Rockwell Center, Makati. Its organizers include the Philippine Daily Inquirer, Rappler, ADMU, De La Salle University, University of the Philippines, Center for Media Freedom and Responsibility, BlogWatch, and Media Nation.

During the conference, Inday Espina-Varona of Let’s Organize for Democracy and Integrity (LODI) also stressed the importance of remaining faithful to the truth. “We cannot combat lies with lies. We cannot be the enemy,” Varona said.

In her talk, Laurio enumerated the various instances when Uson circulated wrong information. She cited a group photo with Vice President Leni Robredo, which Uson took out of context — it was cropped to make it appear that the vice president had a selfie photo with Quezon City Rep. Jorge Banal.

Uson and the president’s supporters on social media have been attacking Robredo and other members of the opposition while rubbing elbows with losing vice presidential candidate Bongbong Marcos, son of the late dictator Ferdinand Marcos.

Meanwhile, detained Senator Leila de Lima also vowed to continue to speak up despite what she called “misogynistic attacks” that she said she suffered at the hands of Duterte and his followers.

The senator was reacting to Duterte’s statement that he would order soldiers to shoot women rebels in the vagina.

“I am not just a survivor, I am a warrior. I am a woman, and I refuse to be silenced. Certainly, I will not be cowed because there is more at stake here than my own personal comfort and interests,” de Lima said.

De Lima is in jail for what human rights advocates say are fabricated drug charges.