Skip to content
Home » GMANews.TV » Mary Magdalene: a prostitute or a beloved apostle of Jesus? 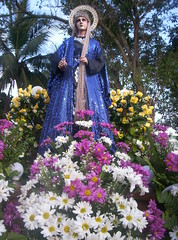 The title of Dr. Jose Rizal’s book, Noli Me Tangere, was taken from the words uttered by the resurrected Jesus Christ to Mary Magdalene on the very first Easter: “Don’t hold me, for I haven’t ascended to my father.” (John 20:17)

These may come as a surprise to many believers as the image of Mary Magdalene in our collective psyche is far from ideal.

This writer asked his cyberfriends on Twitter.com, a social networking site: “Who is Mary Magdalene?” Of the two who replied, one said: “the prostitute in the Bible that was saved by Christ?”

Mary Magdalene is known to many as a reformed whore. In the vernacular, the term “Magdalena” has since carried the subtext of a prostitute.

The Bible says Mary Magdalene is a follower of Jesus “from whom seven demons had gone out,” (Luke 8:2) but she was never identified by the Bible as a prostitute.

A report in Time magazine said Mary Magdalene’s image became distorted when early Church leaders bundled into her story those of the New Testament’s lesser known and unnamed women, or those who were referred to without a last name.

Mary Magdalene was officially identified with the woman sinner in Chapter 7 of Luke when Pope Gregory the Great in 591 declared in a sermon: “She whom Luke calls the sinful woman, whom John calls Mary [of Bethany], we believe to be the Mary from whom seven devils were ejected according to Mark.”

This identification with the woman sinner eventually evolved into an image of Magdalene as a prostitute. It was only in 1969 that the Vatican separated Mary Magdalene’s identification from Mary of Bethany and another female sinner. Unfortunately, the prostitute tag seemed to have stuck.

Apostle of the apostles

The Bible says Mary Magdalene was the first follower of the Lord Jesus to see Him after His resurrection and the one who broke the news to His apostles.

In a February 2007 general audience, Pope Benedict XVI recalled that “it was precisely to Mary Magdalene that St Thomas Aquinas reserved the special title, “Apostle of the Apostles” (apostolorum apostola), dedicating to her this beautiful comment: “Just as a woman had announced the words of death to the first man, so also a woman was the first to announce to the Apostles the words of life” (Super Ioannem, ed. Cai, 2519).”

Mulieris Dignitatem, an apostolic letter of Pope John Paul II on the dignity of vocation of women, also recognizes this special role played by Mary Magdalene.

For Caloocan Bishop Deogracias Iñiguez Jr, the Catholic Bishops Conference of the Philippines Public Affairs head, Mary Magdalene’s past does not matter. What is important, he said, “was that she became a disciple of Jesus… and even one of the great disciples.”

The Gospel of Mary Magdalene

Some religious scholars believe that Mary Magdalene played an even more important role in Jesus’ life and ministry.

In the “The Gospels of Mary: The Secret Tradition of Mary Magdalene, the Companion of Jesus,” Chapman University Prof. Marvin Meyer and Protestant Church minister Esther De Boer collected texts from the New Testament Gospels and other early Church writings to show that Mary Magdalene was not just a follower of Jesus but also His companion and closest disciple.

But while recognizing Mary Magdalene’s special role of being one of the first witnesses of Jesus’ resurrection, Church theologian Monsignor Moises Andrade clarified that these other gospels are part of the so-called gnostic writings not recognized by the Catholic Church.

Gnostics are members of an early Christian movement who believed they held secret knowledge about the divine and the universe.

Controversial books published earlier had claimed that Mary Magdalene was Jesus’ wife, and they had children, and Jesus did not die on the cross. These books include the 1980s bestseller “Holy Blood, Holy Grail” by Michael Baigent, Richard Leigh and Henry Lincoln, and of course, Dan Brown’s novel “Da Vinci Code.”

Even Prof. Meyer concedes that such stories about Jesus and Mary Magdalene cannot be proven: “While a reasonable case can be made that Jesus may have been sexually active and perhaps even married, and that Mary Magdalene, the woman who was closest to him, is the single best choice of a woman who may have been his lover, the evidence remains inconclusive.”

In 2006, the CBCP issued a pastoral statement on the Da Vinci Code, which it said “gives erroneous impressions of many things, among them some fundamental truths of the Christian faith.”

“The witness of the believers of Christ, dating from the apostles to the saints and martyrs of our time, constitutes the most reliable ‘evidence’ in history of the truth about Jesus. The Church does not manipulate revealed truth. It serves the truth,” the CBCP statement said. GMANews.TV/GMA News Research